In this post, I’ll present a comparison of the experimental results of several published implementations of consensus methods for wide-area/geo replication. For each, I’ll attempt to capture which experiments were reported, what quorum sizes were used, and what the throughput and latency numbers were.

This paper describes the design and implementation of Egalitarian Paxos (EPaxos), a new distributed consensus algorithm based on Paxos. EPaxos achieves three goals: (1) optimal commit latency in the wide-area when tolerating one and two failures, under realistic conditions; (2) uniform load balancing across all replicas (thus achieving high throughput); and (3) graceful performance degradation when replicas are slow or crash. Egalitarian Paxos is to our knowledge the first protocol to achieve the previously stated goals efficiently—that is, requiring only a simple majority of replicas to be nonfaulty, using a number of messages linear in the number of replicas to choose a command, and committing commands after just one communication round (one round trip) in the common case or after at most two rounds in any case. We prove Egalitarian Paxos’s properties theoretically and demonstrate its advantages empirically through an implementation running on Amazon EC2.

There is no designated leader, and there are no leader elections. Each command gets a new leader. Multiple replicas can act as leader simultaneously for different commands. 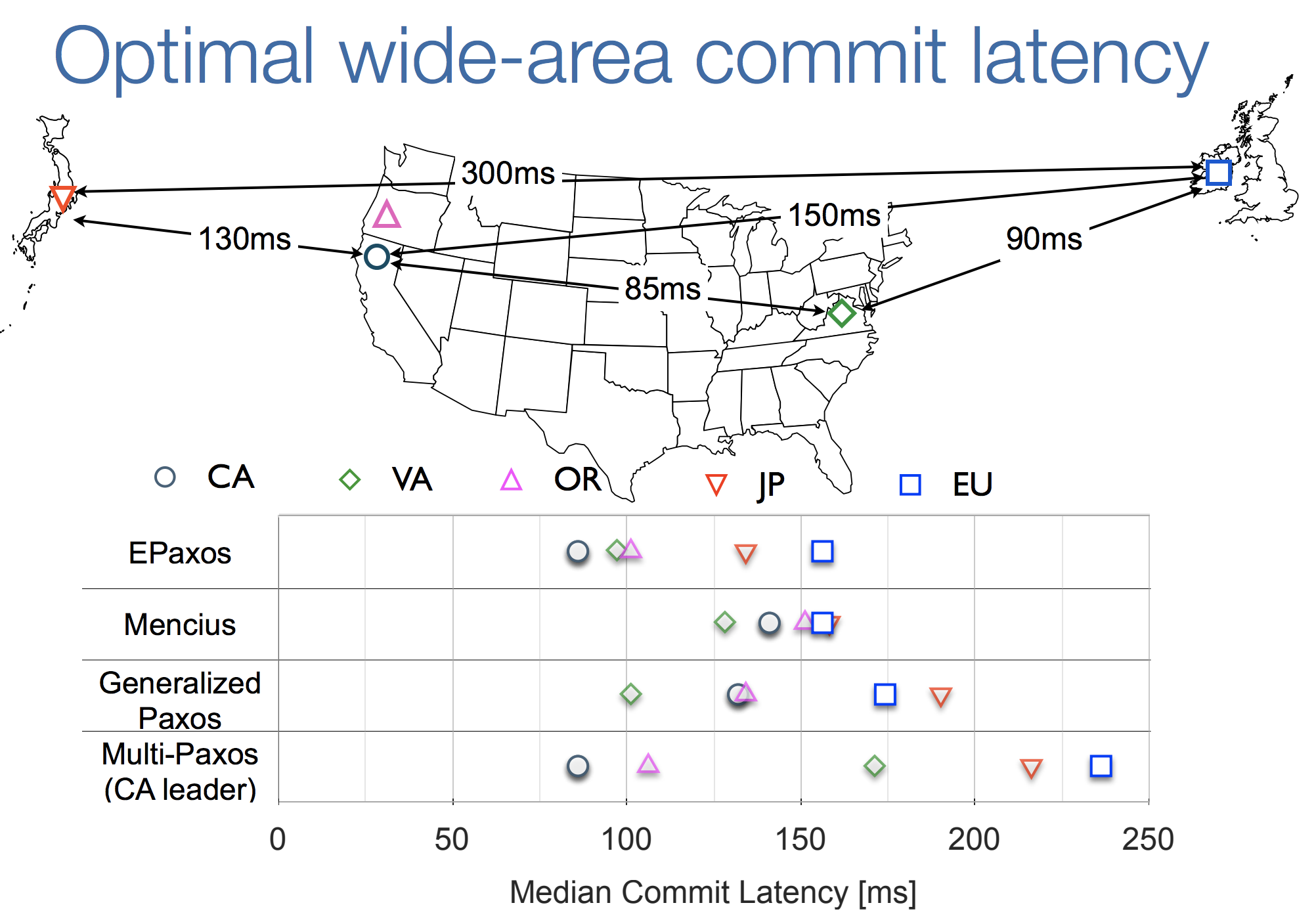 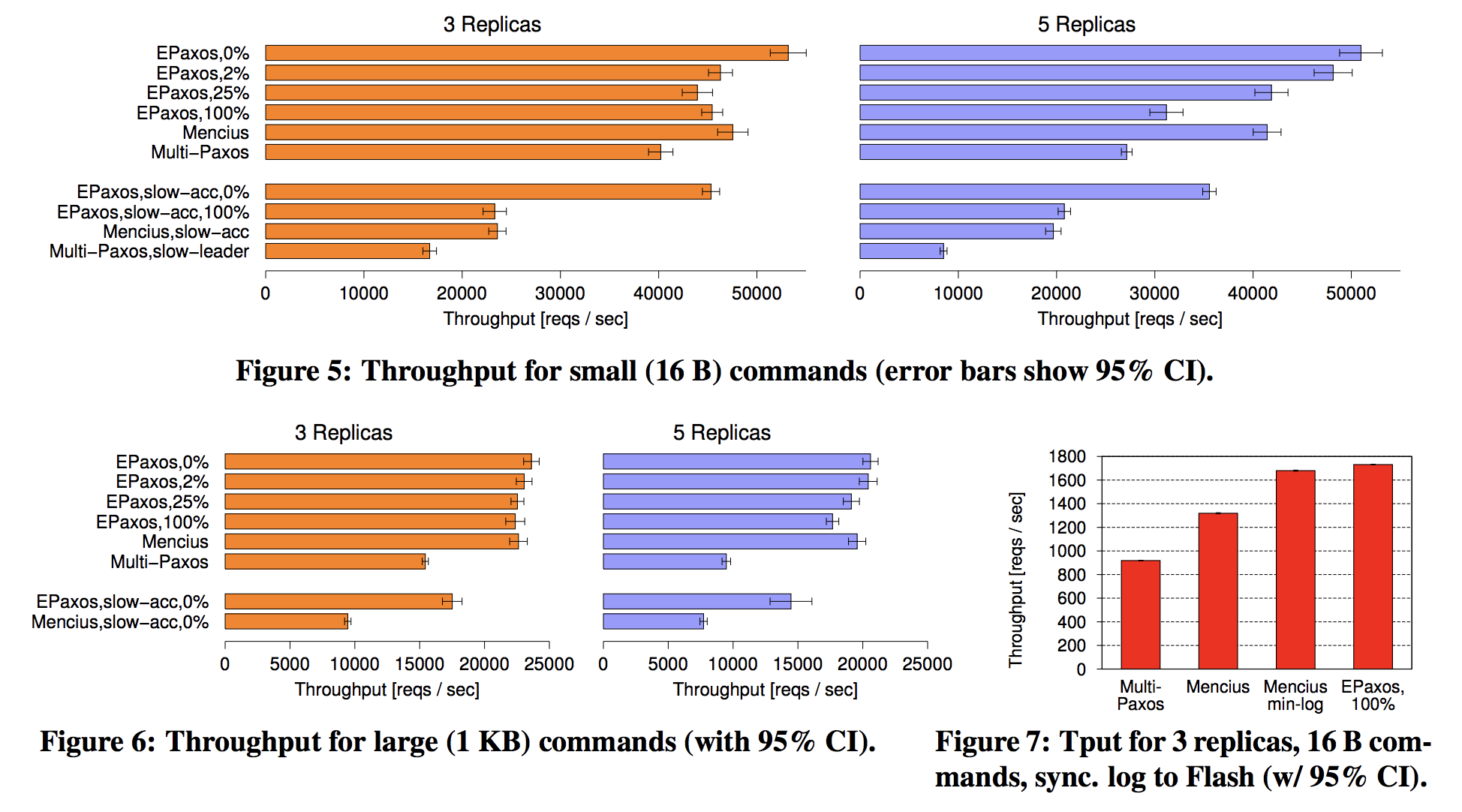 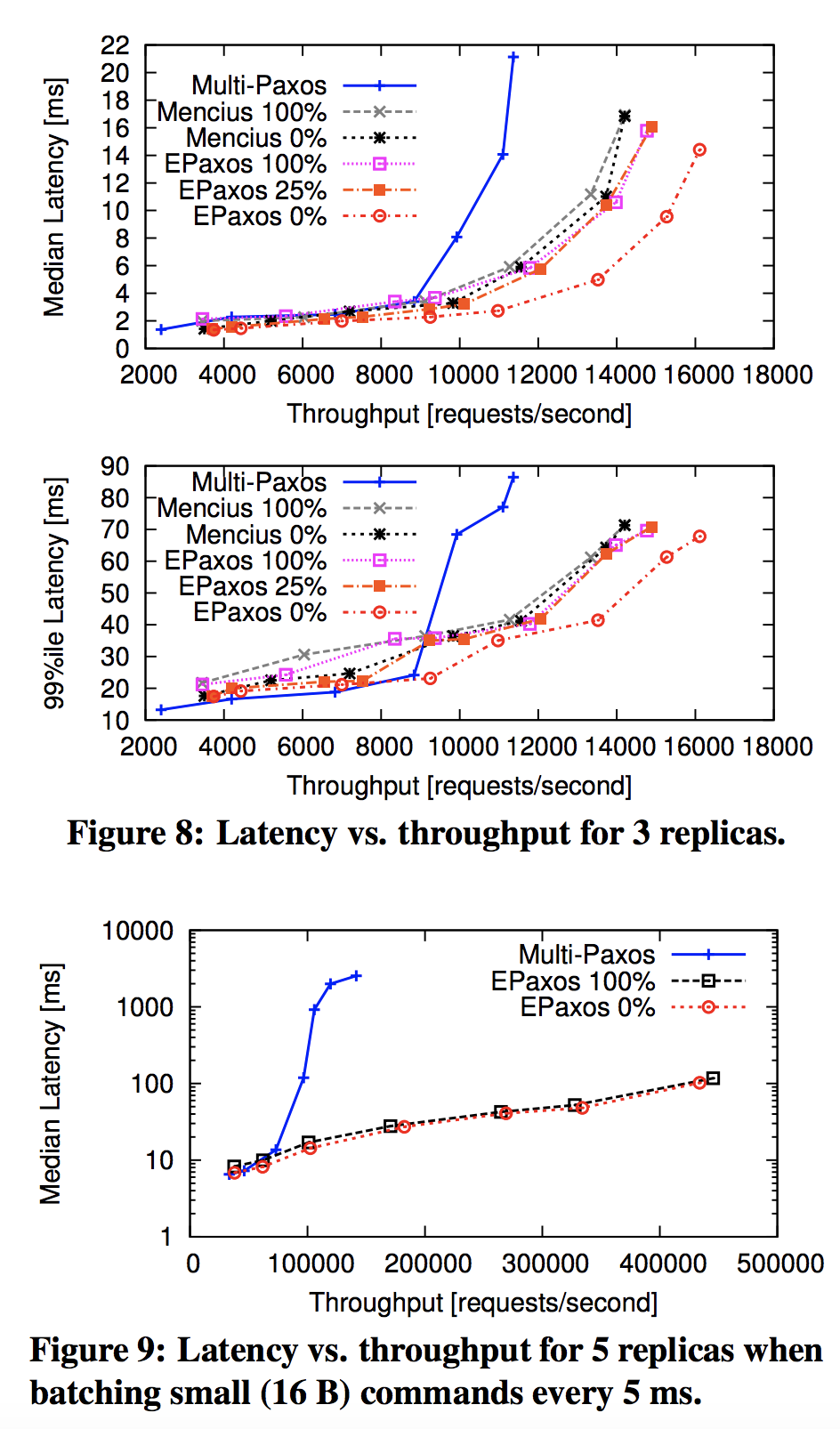 Notes For ePaxos, execution latency differs from commit latency because a replica must delay executing a command until it receives commit confirmations for the command’s dependencies.

Many distributed storage systems achieve high data access throughput via partitioning and replication, each system with its own advantages and tradeoffs. In order to achieve high scalability, however, today’s systems generally reduce transactional support, disallowing single transactions from spanning multiple partitions. Calvin is a practical transaction scheduling and data replication layer that uses a deterministic ordering guarantee to significantly reduce the normally prohibitive contention costs associated with distributed transactions. Unlike previous deterministic database system prototypes, Calvin supports disk-based storage, scales near-linearly on a cluster of commodity machines, and has no single point of failure. By replicating transaction inputs rather than effects, Calvin is also able to support multiple consistency levels — including Paxos-based strong consistency across geographically distant replicas — at no cost to transactional throughput.

Strong leader. One replica is designated as master; transaction requests are forwarded to sequencers located at nodes of the master. After compiling each batch, the sequencer component on each master node forwards the batch to all other (slave) sequencers in its replication group. If the master fails, the replication group has to agree on (a) last valid batch and (b) specific transactions of that batch. 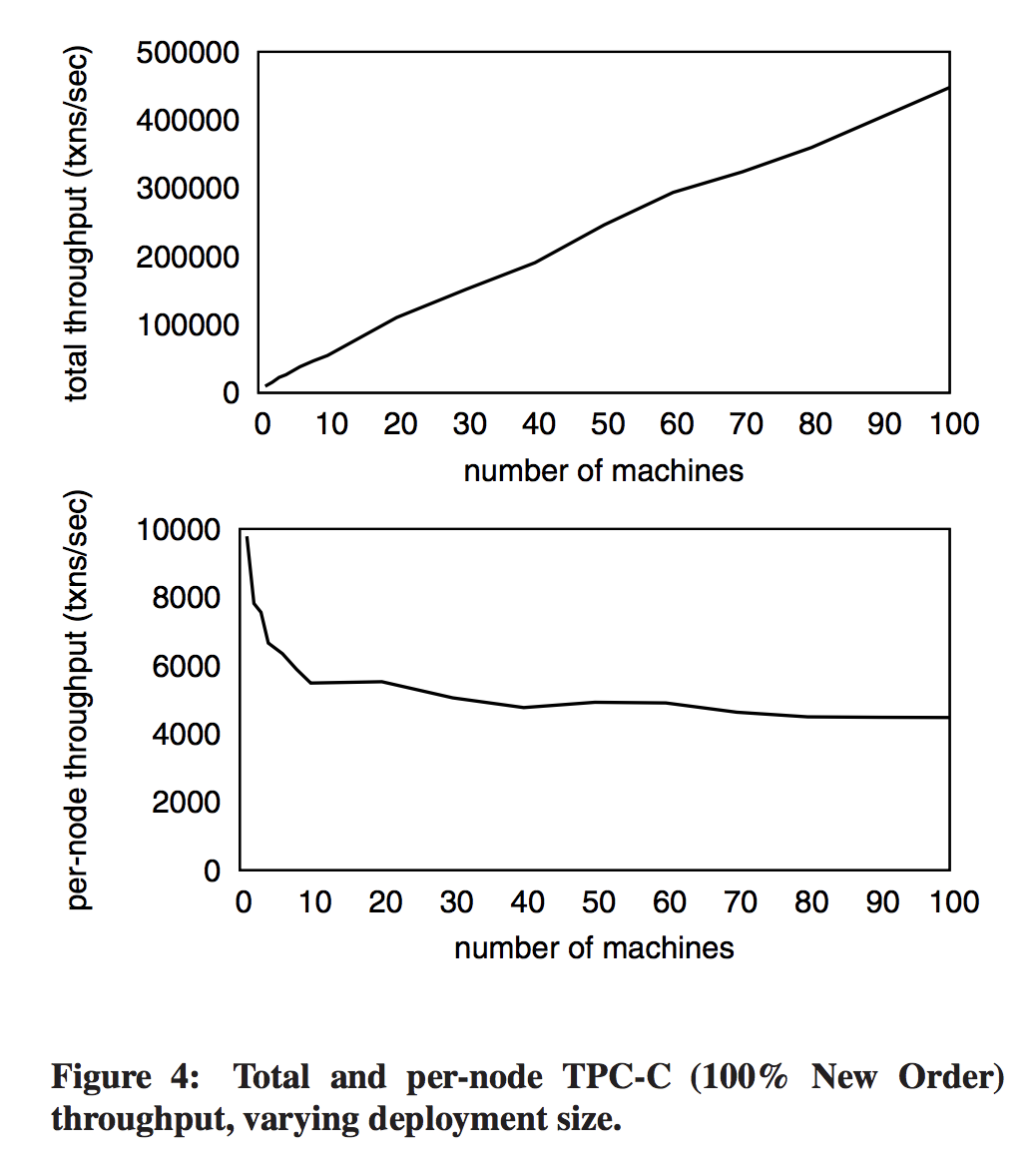 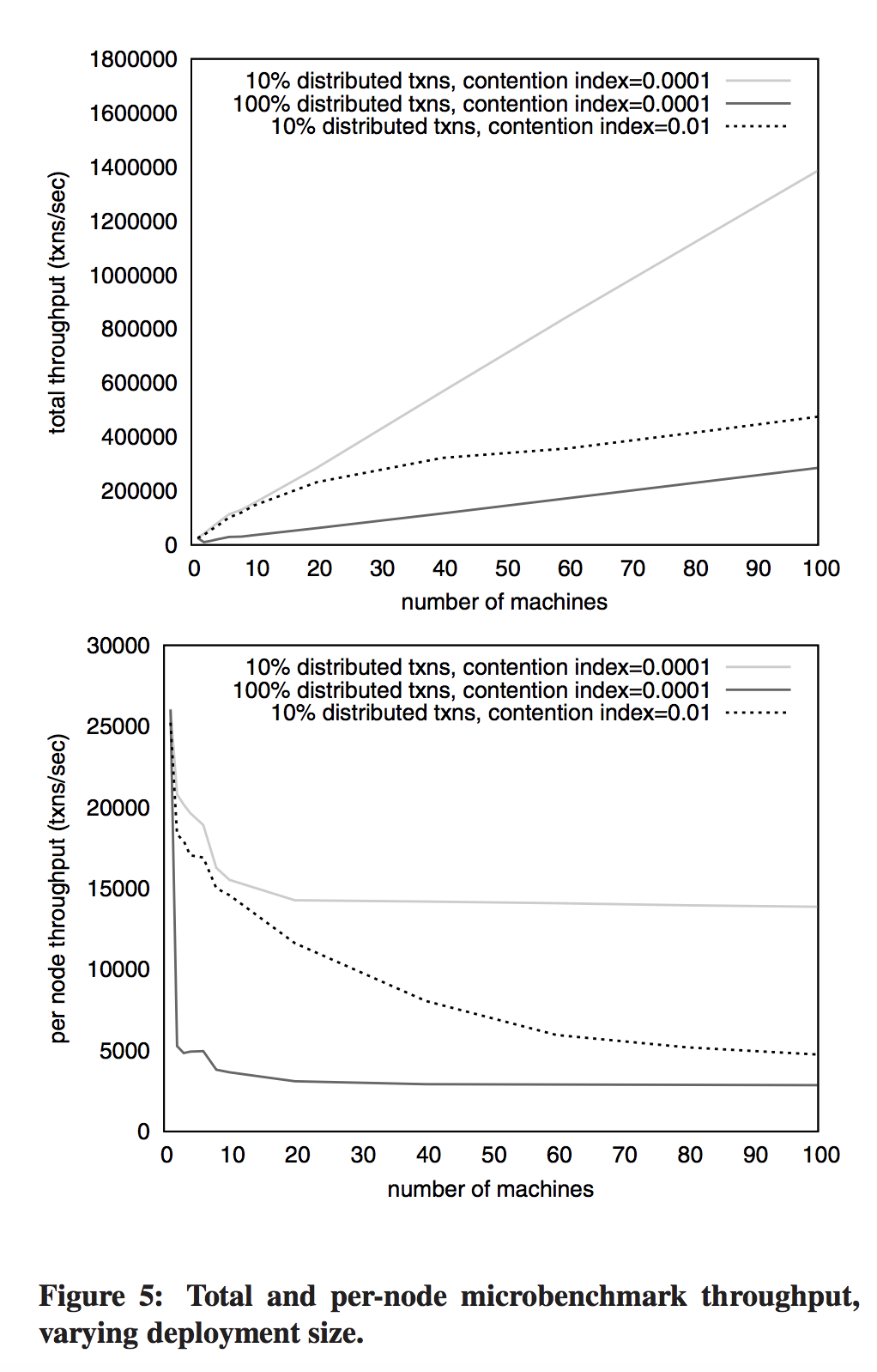 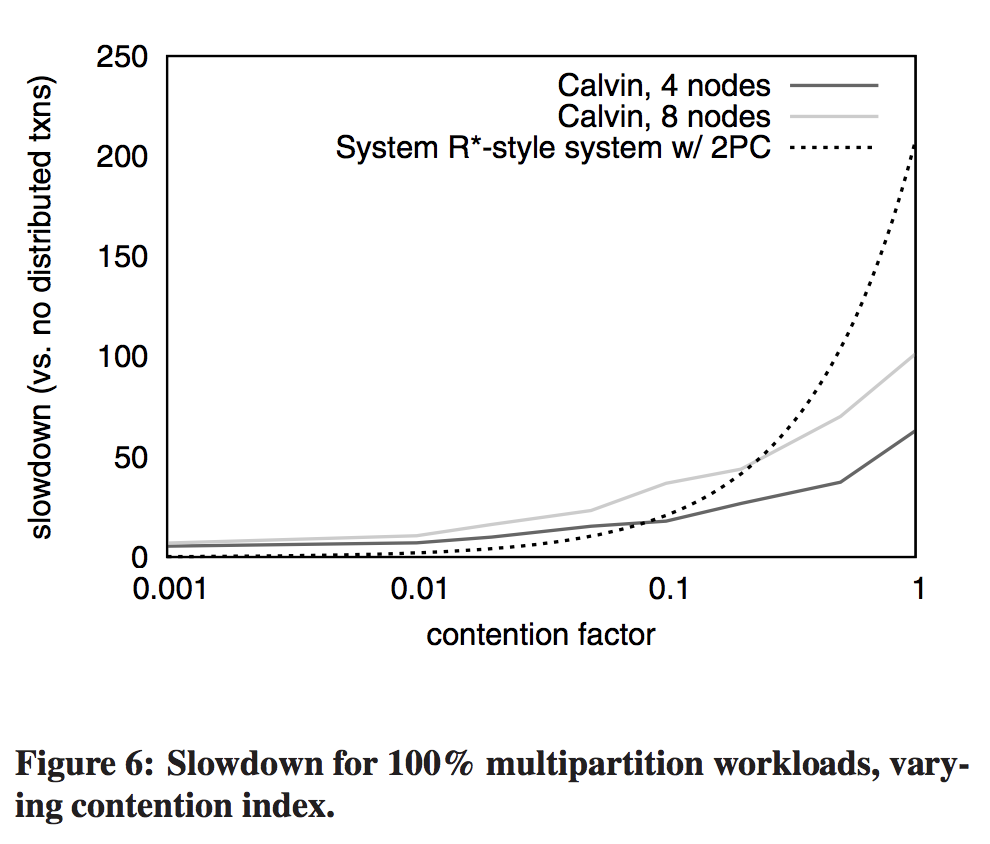 The more machines there are, the more likely at any given time there will be at least one that is slightly behind for some reason. The fewer machines there are in the cluster, the more each additional machine will increase skew. The higher the contention rate, the more likely a machine’s random slowdown will slow others. Not all EC2 instances yield equivalent performance, and sometimes an EC2 user gets stuck with a slow instance — a slightly slow machine was added when they went from 6 nodes to 8 nodes.

Replicating data across multiple data centers allows using data closer to the client, reducing latency for applications, and increases the availability in the event of a data center failure. MDCC (Multi-Data Center Consistency) is an optimistic commit protocol for geo-replicated transactions, that does not require a master or static partitioning, and is strongly consistent at a cost similar to eventually consistent protocols. MDCC takes advantage of Generalized Paxos for transaction processing and exploits commutative updates with value constraints in a quorum-based system. Our experiments show that MDCC outperforms existing synchronous transactional replication protocols, such as Megastore, by requiring only a single message round-trip in the normal operational case independent of the master-location and by scaling linearly with the number of machines as long as transaction conflict rates permit.

No strong leader required. Needs only a single wide-area message round-trip to commit a transaction in the common case. Is “master-bypassing” — can read or update from any node in any data center.

Writers of complex storage applications such as distributed file systems and databases are faced with the challenges of building complex abstractions over simple storage devices like disks. These challenges are exacerbated due to the additional requirements for fault tolerance and scaling. This paper explores the premise that high-level, fault-tolerant abstractions supported directly by the storage infrastructure can ameliorate these problems. We have built a system called Boxwood to explore the feasibility and utility of providing high-level abstractions or data structures as the fundamental storage infrastructure. Boxwood currently runs on a small cluster of eight machines. The Boxwood abstractions perform very close to the limits imposed by the processor, disk, and the native networking subsystem. Using these abstractions directly, we have implemented an NFSv2 file service that demonstrates the promise of our approach.

Uses a single master. Lock service w/ single master server and 1+ slave servers. Only master hands out leases. Master’s identity is part of the global state. Lock service keeps the list of clerks as state. If master dies, slave takes over after passing a Paxos decree that changes the identity of the current master. New master recovers lease state by reading Paxos state to get list of clerks & gets lease state from them. 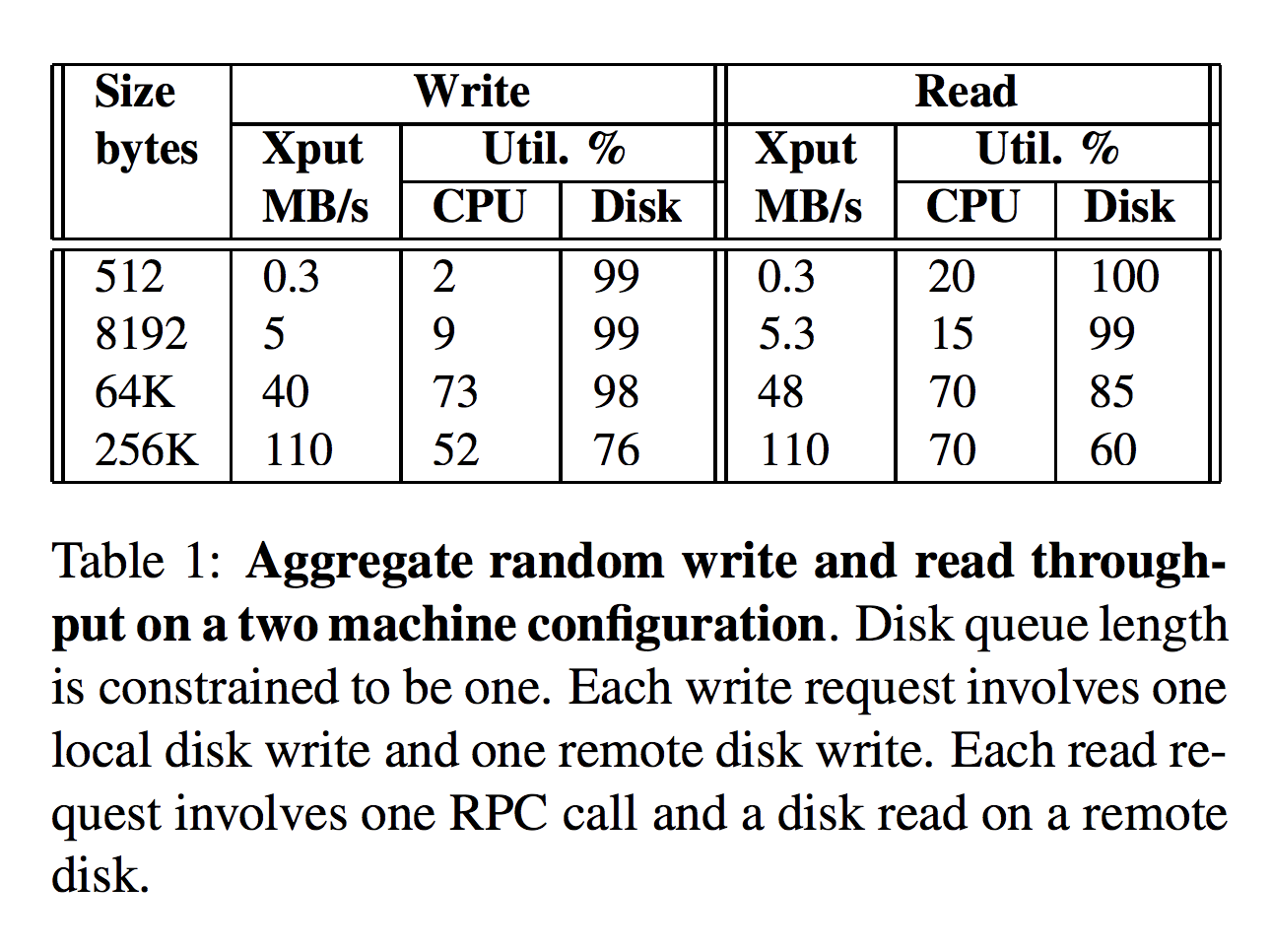 (Effect of batching on allocations)

The task of consistently and reliably replicating data is fundamental in distributed systems, and numerous existing protocols are able to achieve such replication efficiently. When called on to build a large-scale enterprise storage system with built-in replication, we were therefore surprised to discover that no existing protocols met our requirements. As a result, we designed and deployed a new replication protocol called Niobe. Niobe is in the primary-backup family of protocols, and shares many similarities with other protocols in this family. But we believe Niobe is significantly more practical for large-scale enterprise storage than previously-published protocols. In particular, Niobe is simple, flexible, has rigorously-proven yet simply-stated consistency guarantees, and exhibits excellent performance. Niobe has been deployed as the backend for a commercial Internet service; its consistency properties have been proved formally from first principles, and further verified using the TLA+ specification language. We describe the protocol itself, the system built to deploy it, and some of our experiences in doing so.

Uses the “primary-backup” or “primary copy” paradigm for fault-tolerance — primary receives an update from client, sends it to one or more secondaries, and then replies to client. Some machines (less than 10) run a global state manager (GSM) module, which uses a consensus service (Paxos) to reliably store critical global state used by storage and policy manager subsystems. Technique of using the GSM to kill and reincarnate secondaries, while using all live replicas (but not the GSM) for performing updates, is mathematically equivalent to the “wheel” quorum system.

Note: these aren’t framed exactly as experiments & results so much as observations of the deployed system 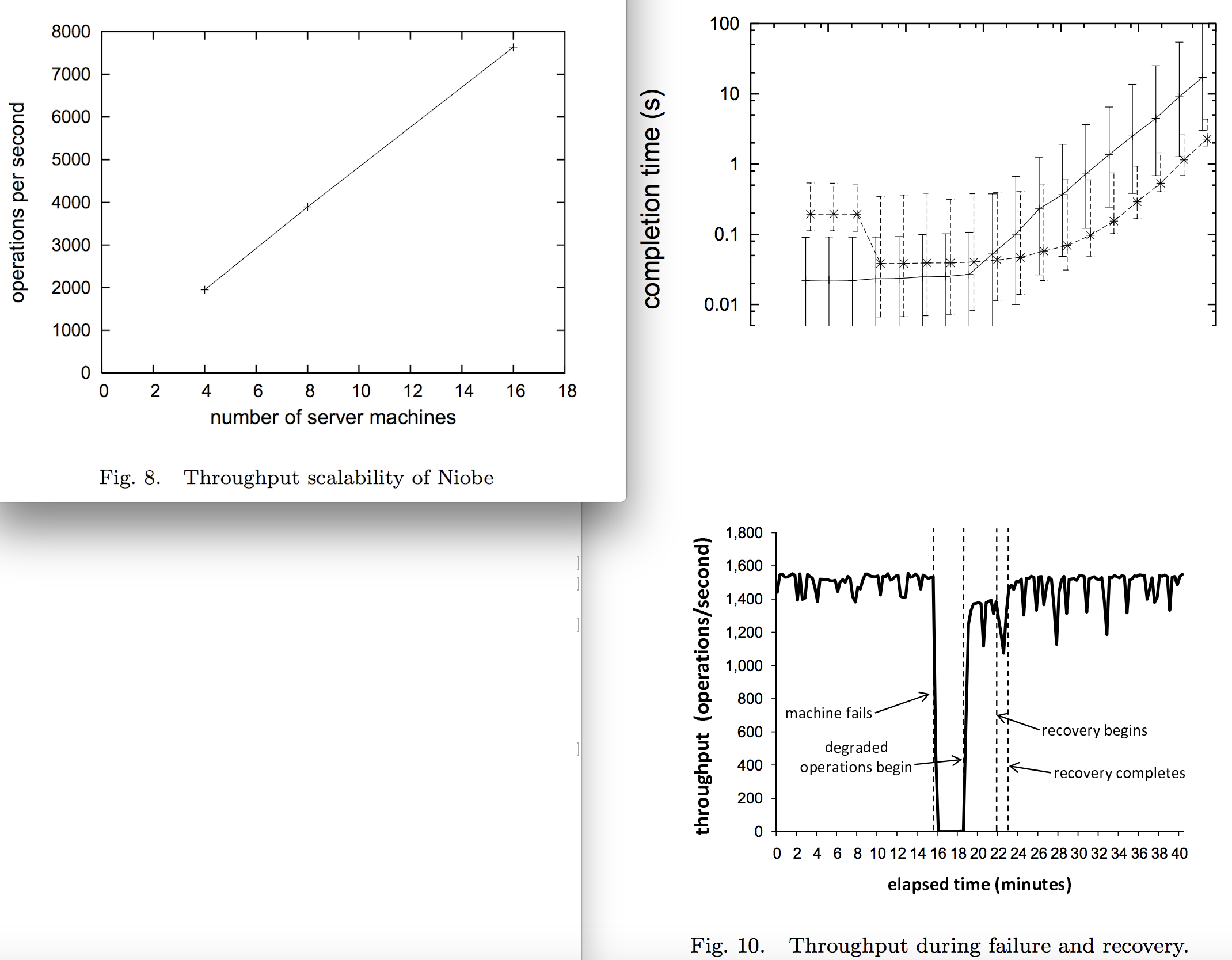 We present a protocol for general state machine replication – a method that provides strong consistency – that has high performance in a wide-area network. In particular, our protocol Mencius has high throughput under high client load and low latency under low client load even under changing wide-area network environment and client load. We develop our protocol as a derivation from the well-known protocol Paxos. Such a development can be changed or further refined to take advantage of specific network or application requirements. 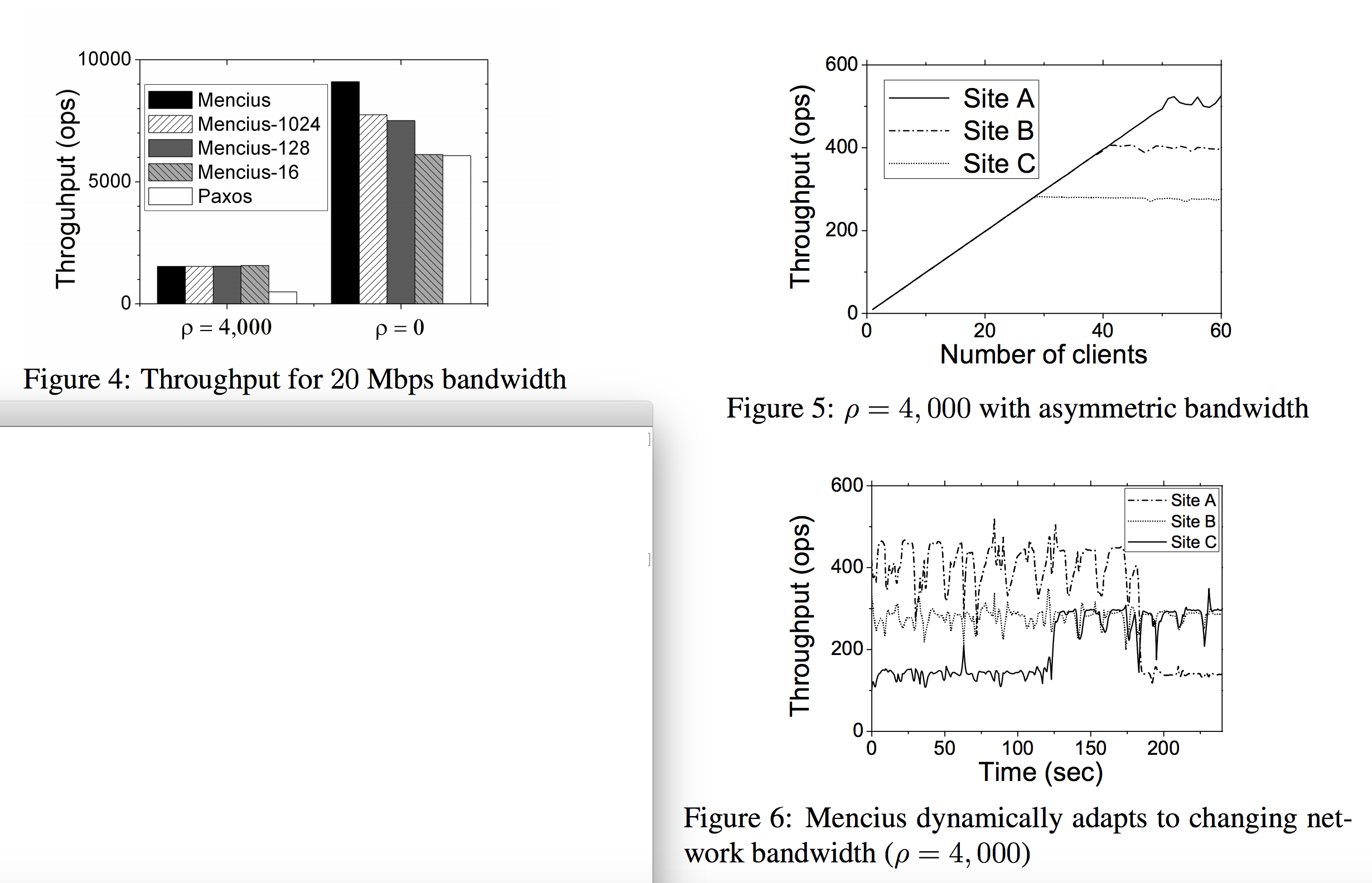 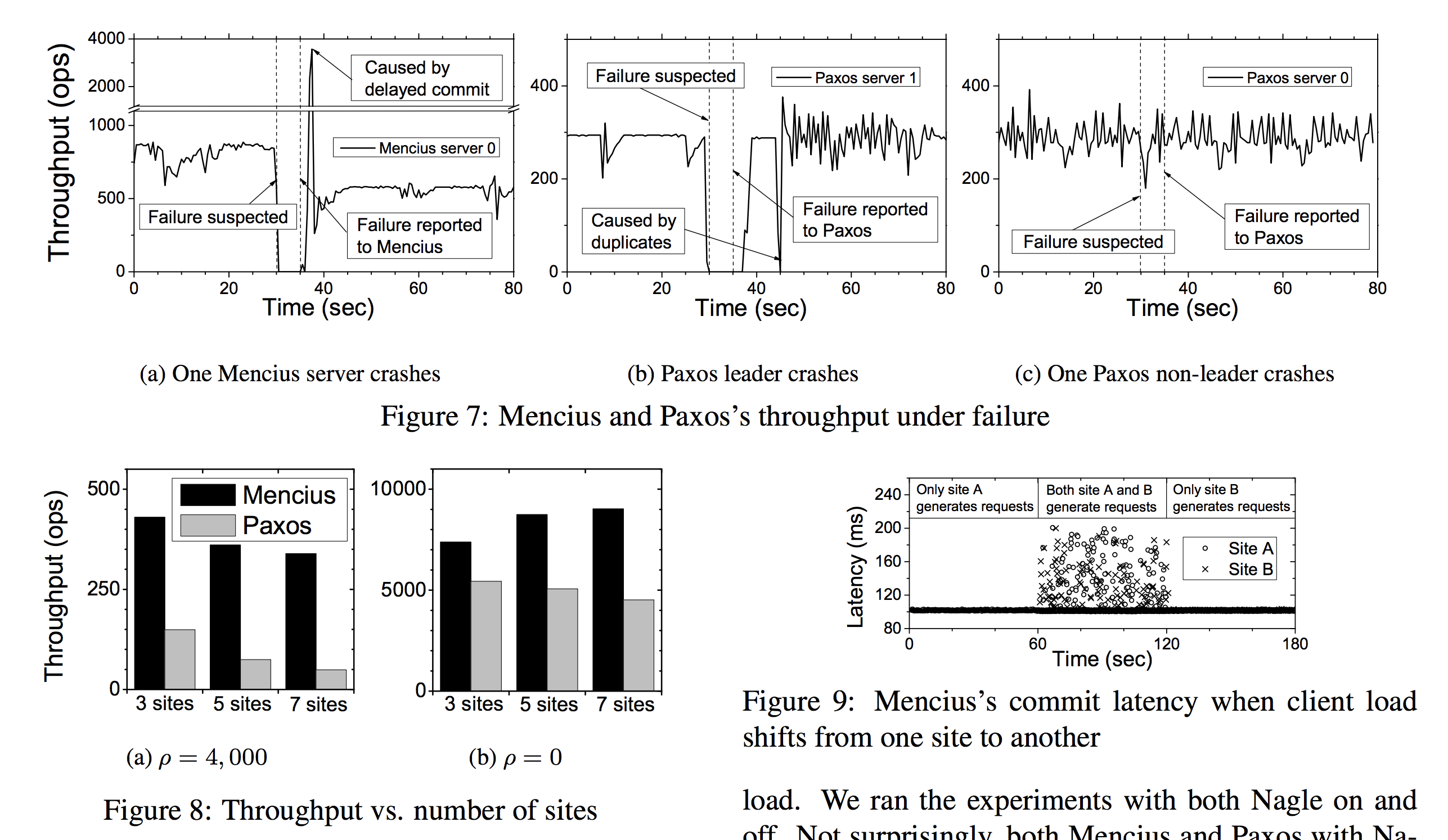 CORFU organizes a cluster of flash devices as a single, shared log that can be accessed concurrently by multiple clients over the network. The CORFU shared log makes it easy to build distributed applications that require strong consistency at high speeds, such as databases, transactional key-value stores, replicated state machines, and metadata services. CORFU can be viewed as a distributed SSD, providing advantages over conventional SSDs such as distributed wear-leveling, network locality, fault tolerance, incremental scalability and geodistribution. A single CORFU instance can support up to 200K appends/sec, while reads scale linearly with cluster size. Importantly, CORFU is designed to work directly over network-attached flash devices, slashing cost, power consumption and latency by eliminating storage servers.

When a client wants to write to a replica set of flash pages, it updates them in a deterministic order, waiting for each flash unit to respond before moving to the next one. The write is successfully completed when the last flash unit in the chain is updated. As a result, if two clients attempt to concurrently update the same replica set of flash pages, one of them will arrive second at the first unit of the chain and receive an error overwrite. This ensures safety-under-contention. 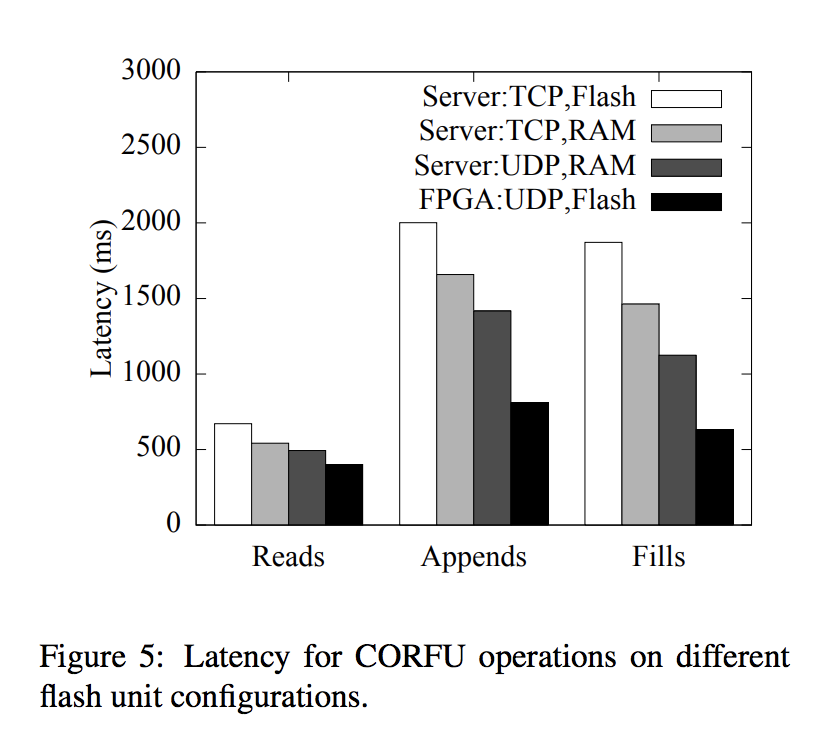 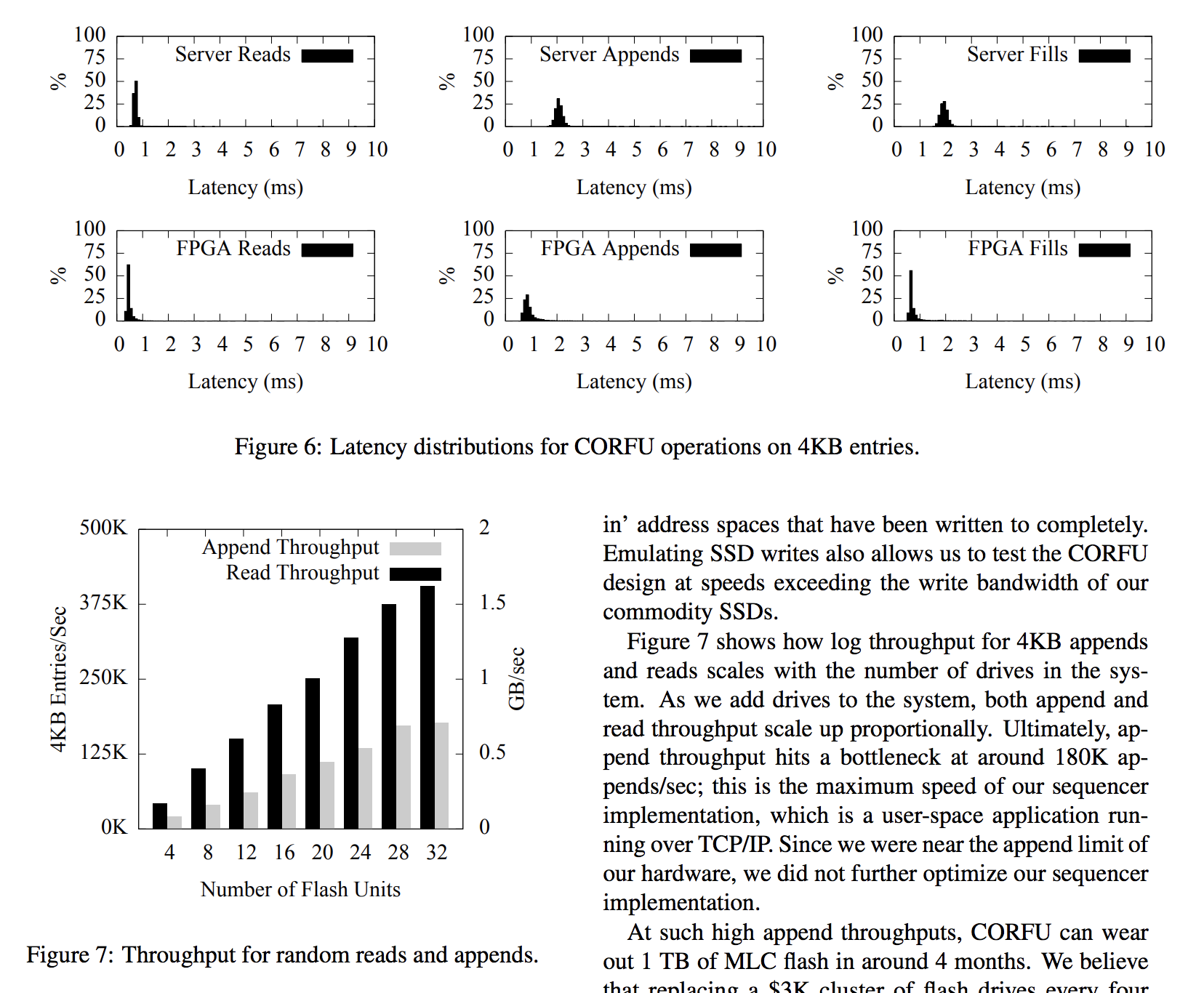 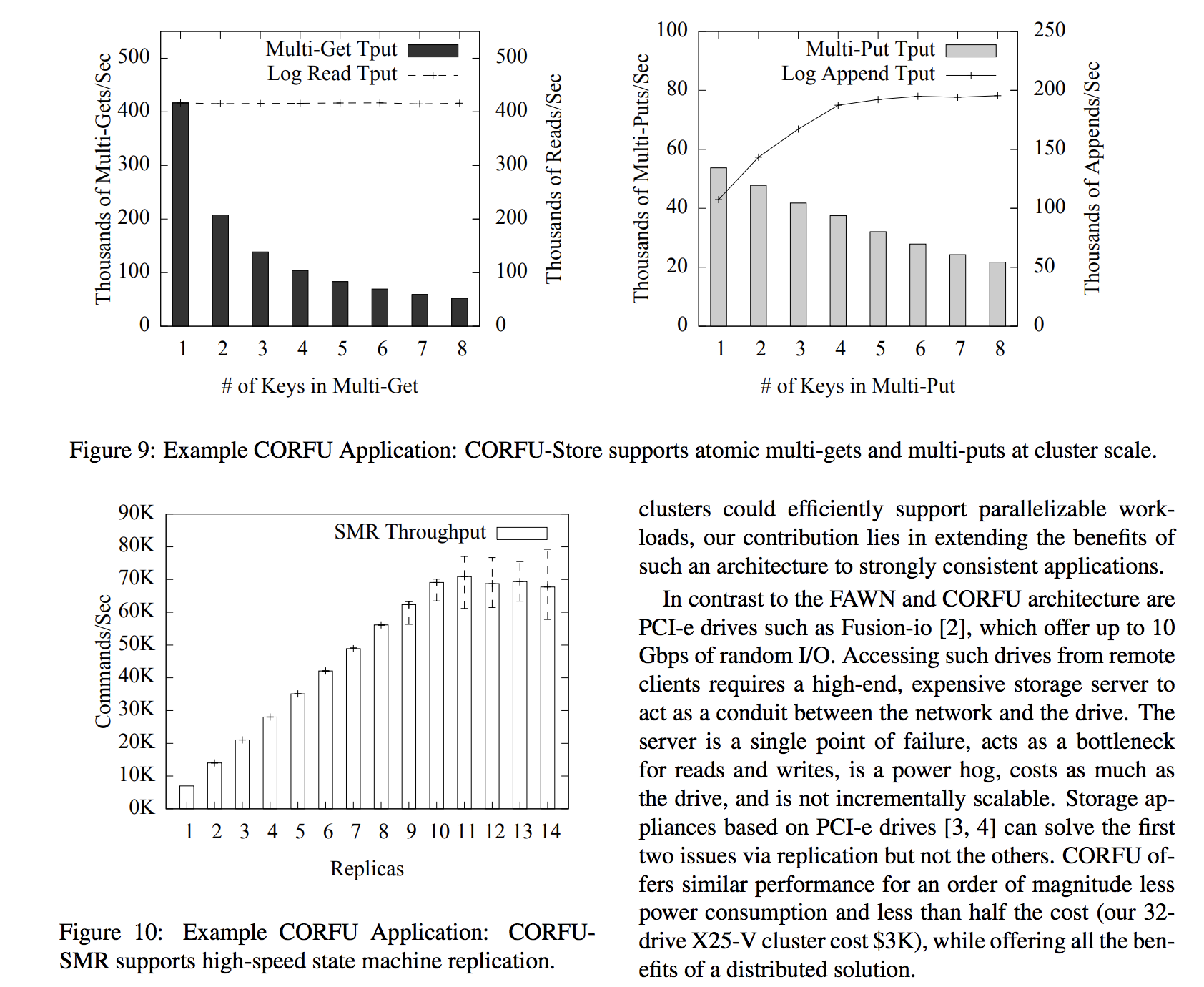