It’s no secret that data scientists love scikit-learn, the Python machine learning library that provides a common interface to hundreds of machine learning models. But aside from the API, the useful feature extraction tools, and the sample datasets, two of the best things that scikit-learn has to offer are pipelines and (model-specific) pickles. Unfortunately, using pipelines and pickles together can be a bit tricky. In this post I’ll present a common problem that occurs when serializing and restoring scikit-learn pipelines, as well as a solution that I’ve found to be both practical and not hacky.

If you’re not familiar with scikit-learn Pipelines, they’re definitely worth a look (I particularly like Zac Stewart’s post on them). In essence, they (together with FeatureUnions) provide a method for sanely sequencing the stages of machine learning — from feature extraction to vectorization, normalization, dimensionality reduction, and modeling. Instead of a bunch of messy fit_transforms and fit_predicts, intermediate variables like “x_vectorized” or “y_encoded”, and steps requiring a human-in-the-loop to execute them in the proper sequence, Pipelines allow us to execute these steps in one fell swoop:

Even better, scikit-learn exposes two classes, BaseEstimator and TransformerMixin, which allow us to create our own custom steps for our pipelines. Let’s say we’ve made a special transformer for text data, TextNormalizer, that implements the transformer interface:

Now we can use our TextNormalizer in a pipeline! Since we’ll be using our custom text transformer to tokenize and tag our documents, we’ll specify that our TfidfVectorizer not do any tokenization, preprocessing, or lowercasing on our behalf (to do this we have to specify a dummy identity function to use as our tokenizer).

Let’s save that model! Python’s pickle library gives us a way to do this, and scikit-learn also has a specialized version of pickle called joblib that offers some specialization for serializing fitted scikit-learn estimators and transformers.

If we want to serialize the first model from this post (the one that does scaling, then dimensionality reduction, and finally classification using a decision tree), we do it like this:

Then we can load the fitted model like this:

Can’t we pickle and load our custom text classification pipeline in the exact same way?

If we try to load the serialized model in the same file in which the TextNormalizer has been defined, no problem: 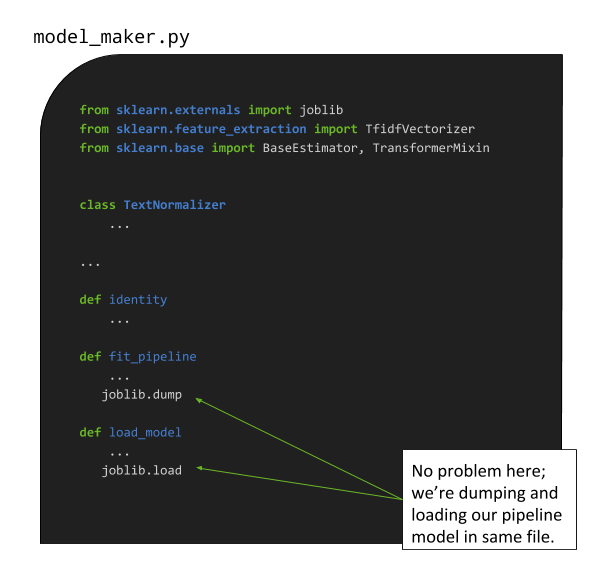 But what if we have one library for testing/building models, and a separate application for serving predictions? In this case, you might encounter the following error:

The problem is that we’ve defined our TextNormalizer class and identity function in one project, build_library, and our serve_library doesn’t know how to interpret those portions of the pickled pipeline when it tries to load the model.

The problem seems to manifest frequently on blogs and other sites like StackOverflow.

Many of the suggestions are to manually associate the custom class with the main module by doing:

However, this felt like a less than satisfying answer.

My eventual solution was instead inspired by Matthew Plourde’s response to the question, How to save a custom transformer in sklearn?…

sklearn.preprocessing.StandardScaler works because the class definition is available in the sklearn package installation, which joblib will look up when you load the pickle. You’ll have to make your CustomTransformer class available in the new session, either by re-defining or importing it. pickle and joblib work the same way in this regard. Import information is stored with the pickled object, which is why you can screw things up when you unpickle an object made with a different version of a module than the one that’s currently installed.

I like his response because it helps us understand the underlying issue, which is that when you serialize an object with pickle or joblib, those libraries don’t only serialize the object, they store information about how to import the libraries and modules necessary for interpreting the object. Thus the solution is to make TextNormalizer and identity things that can, during the training phase, be imported by the build_library’s model_maker module, and later be imported from build_library by the serve_library:

Note that this requires build_library be importable by serve_library; if build_library is a local/custom library and not pip install-able via PyPI, you can do either of the following: